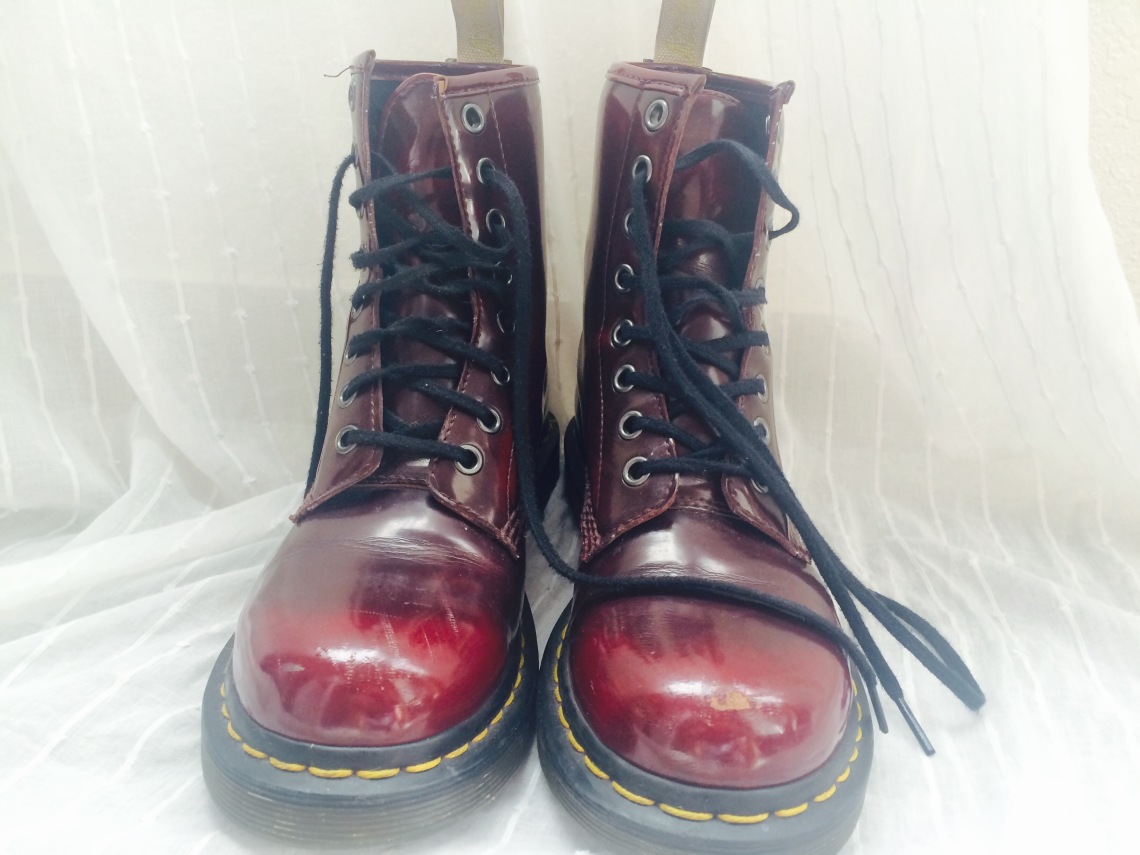 A year ago, I bought a pair of dark maroon boots at a store in some weird town of Indiana. I was traveling alone for the first time and accompanied by my aunt, I marched into the store to simply try on the pair I wanted and would later buy online. When the worker came out with them and I tugged them onto my feet, I didn’t want to take them off. They were tight, uncomfortable, and scary.

After a quick call to my mom many states away and a promise to pay the money back, I walked out of the store with my first pair of Doctor Martens. My sister had the exact same pair for a few months before and after seeing a couple of my favorite singers and old punk bands wearing the same brand, I needed my own pair.

I waited a few weeks to wear them since it was the middle of summer and insulated boots did not at first seem too welcoming. Once I did put them on, it processed how uncomfortable the boots really were. If I pushed my toes up ever so slightly, they touched the top of the boot. My slim feet were constricted by rough material. Needless to say, I panicked. I mean, I had just convinced my hesitant mother and aunt to buy these two hundred dollar boots and now they’re too small. I’m not a dramatically stubborn person, but when I put my mind to something, it gets done.

So the breaking in process began.

I wore two or three pairs of socks on and walked around the house and my bedroom. I shoved newspapers in as tight as they could go when I wasn’t wearing them to stretch them out. I tugged at the fake leather. After many google searches, I decided the best way to break them in was to, get ready, wear them.

My eighth grade year had begun and I wore them with my uniform for the first time on a day that was roughly eighty or ninety degrees. A pair of flats stuffed in my lunch box and band aids tucked in my backpack, I was prepared for everything. It was horribly uncomfortable, but I was determined to love these boots. Day after day, I patched up my blisters and eventually built up some tough feet and broke in the boots.

I wore my Docs almost every day for ten months. I loved them. I still do. They acted as a security blanket that I could walk around with. People were intimidated by them and I always got comments on them, some not the nicest in the world from a few of the girls. The best part of that is that a few months later, I began to see a few of those same girls walking around with imitation Docs. Hmm… All I have to say to that is, fake ones look tacky.

They give me about an extra inch in height and allow me to kick anything I want and feel nothing. (Maybe not the last part. It was one time and the boy was annoying, so sorry I’m not sorry.)

My Docs are a form of consistency in my life. They have a few scratches and folds, but I can tell you where I got each and every one of them. The rip is from one of my first haunted houses where they made us climb on the ground. When I stood up, there was a lady with a chainsaw who held it dangerously close to my feet and I looked at her and said,”These are $200 boots. Get your chainsaw away from them.” She laughed, and I took the opportunity to run, smashing my foot on the corner of the maze wall. The thin scratch is from someone rolling over my foot with a rolling backpack in the school hallways which then resulted in a sharp kick from me. The scuff on the right boot is from the 1975 concert this past May which holds a spot as probably one of the best days of my life.

(And screw you, boy who said they looked like Ronald McDonald boots. Screw you.)

View all posts by alexanbhall